Flowers and Machines
Moments of majesty that transcend any musical genre

Flowers and Machines delivers a unique sound that can be best described as a blend of Euro electronic with neo-classical influences. 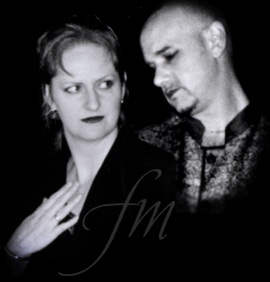 The members: Ken Gerhard and Kat Jones are both accomplished artists/songwriters who have combined forces to create a distinctive sound rich in emotion and beautifully honest. Gerhard’s deep baritone voice contrasts beautifully with the ethereally angelic touches of Jones creating a seldom seen intimacy with the audience.

Flowers and Machines is:

Flowers and Machines began as a series of demos by Ken Gerhard of Bamboo Crisis in the mid to late 1980s. In 1989 he met the multi-talented instrumentalist Kat Jones.

Soon they began working together in the studio on other projects but were performing as Flowers and Machines by the early 90s.

In 1997, Flowers and Machines’ first release called “Eden” appeared on The Pink & The Black compilation CD (Delinquent Records) and quickly found a niche with club DJ’s.

Kat Jones has been nominated best songwriter Houston Music Awards and is busy with her ambient solo material as well as remixing acts such as Blondie, Olive and Sparks with DJ JD Arnold.

The stunning opening track of Remembrance, “Eden”, was also Flowers and Machines first offering when the song appeared on Delinquent Records compilation,The Pink and The Black. Other stand out tracks include the synth brilliance of “I Breathe” the dark melancholy of “The Garden,” the steady beat and uplifting attitude of “All in Your Hands,” and the touching “Sail Away.”

Overall Remembrance is a soothing yet danceable release that you won’t soon forget. ~OCTAVIA OUTBURN MAGAZINE